For the first time in 2015, the Madison+Main-iacs have managed to take over the Weekly Report. And by “take over” we mean, Dave asked me, Derek Fair, to write it and I politely agreed. As our fearless leader is out of the office, attending the Virginia Council of CEOs Annual Retreat in Williamsburg, we’re attempting to learn the new phone system. In other words, if you happen to call and get hung up on, there’s a 93.7% chance that we didn’t mean too. The other 6.3%? Well, I’m sure it’s the interns fault.

Monday, April 20th – As always, we started off our week with the MMMMM (Madison+Main Monday Morning Meeting). The primary focus? Souvenirs from Dave’s recent cruise. The luckiest prize winner of us all was intern, Robbie “Lunch Box” Evans. He was given a perpetual wooden block calendar with a pink cat attached to the top. Robbie likes cats. And wood. And calendars. So he’s pretty stoked. 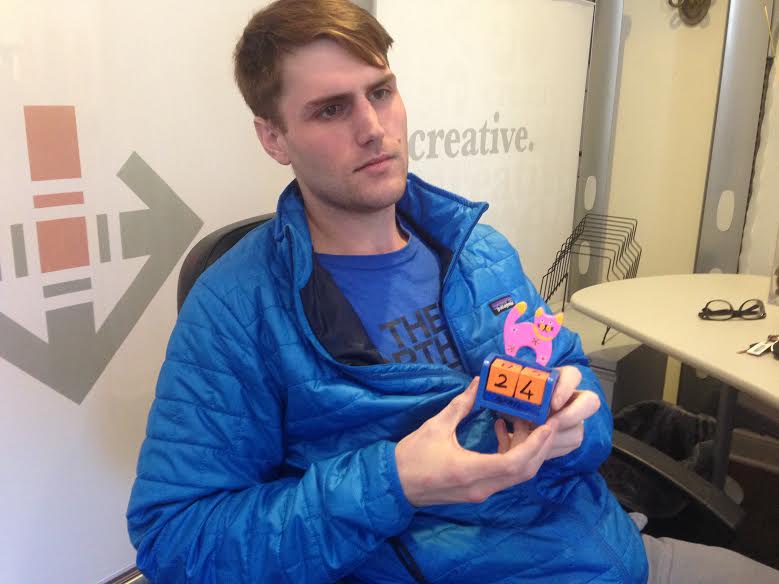 Robbie and gift from St. Maarten.
During the afternoon, we headed to RVA’s Pearl Raw Bar for Silverback Distillery’s private tasting event. The event was well-attended and our craft spirit making friends from Afton, Virginia were able to “mix and mingle” with the “movers and shakers” in RVA’s restaurant scene. Free vodka and gin tastings? Of course, Richmond.com’s Karri Pfeiffer showed up!
Main-iac Fact: The gorilla standing outside of Pearl was Lindsey.
Tuesday, April 21st – On Tuesday morning, we hosted Cate Newbanks, Founder and Executive Director of FACES of Virginia, a super nice lady and one of Madison+Main’s new client. FACES is a non-profit organization that helps adoption, foster and kinship families across Virginia, learn about them here!
On Tuesday afternoon we had a productive meeting with our friends at Advanced Wellness Centre. To schedule a free one hour lunch and learn workshop for your company, call 673-WELL (673-9355) and ask for Mary Beth.
Later that night, Lindsey and Cassie attended the Ross Publishing ‘Out of the Box’ party at Morton’s. Lindsey won a $50 gift card to Wabi Sabi and has been drooling daily, ever since. We often have to contain her excitement. Speaking of food and excitement.
Main-iac Fact: Tuesday is dollar taco night at Baja Bean and this week Madalyn saved over 75 cents.
Wednesday, April 22nd – On Wednesday, we met with our friends at Virginia Women’s Center to discuss plans for a PR campaign. Details coming soon! 🙂 VWC is among the first OB/GYN practices in Virginia to offer the new Mona Lisa Touch system. Learn more here.
Later on Wednesday afternoon Casey, Kaity and Dave shot some online videos for CowanGates. Did you know, the new Sugar Shack donut shop is opening up directly across the street from them? I think we’ll have to schedule more meetings on their side of town…
Wednesday was also Sue’s birthday, Dave’s wife and our real boss. Sue called in to say “THANK YOU” – in a British accent – for all the random e-mails she received this week, since Dave put her e-mail address in last week’s Weekly Report. Folks, feel free to continue sending them!

Main-iac Fact After spending Monday and Tuesday with the Main-iacs, Kara returned to Blacksburg Wednesday and ran in the Fun Run at her daughter, Sutton’s school.

Thursday, April 23rd – On Thursday afternoon, Madison+Main got new phones! The new, gently-used, phone system now comes with a 4″x4″ photo screen so we can enjoy scenic mountain views at work. Seriously folks, if you’re in the neighborhood, make sure you stop by 101 E Cary to check out our new system.

Friday, April 24th –  On Friday, we learned that Dave had to “retreat” from the VACEOs retreat for some dental work in Richmond. But don’t worry folks, Boss Man is all smiles once again. In the early morning hours of Thursday, Dave took a tumble and chipped his tooth on the hotel sink. He claimed the worst part about it was walking around with a hole in his face for a day and a half. The best part about the retreat was the presentation by Shawn Achor, author of The Happiness Advantage.

Main-iac Fact Fridays are doggy days at Madison+Main. This afternoon, Patrick with Sprocket Media stopped by with his four-legged friend, Teddy, who is now BFF’s with Casey’s dog,Ridgley.

1. Our May Media Mixer at Morton’s is on Wednesday, May 20th. RSVP on our Facebook page!

2. The Hospital Hospitality House Fancy Hat Party is on Thursday, April 30th. Get your tickets here so you can see which hats Cassie and Lindsey end up wearing.