IT TAKES A VILLAGE

This week’s Weekly Report is coming to you live from the Chesterfield Country Airport, where an entire village of people are gathered to shoot Village Bank’s latest TV ad, so I am having to phone in this week’s e-mail. Unlike the author of ‘It Takes A Village’ – Hillary Clinton – I keep all of my e-mails in a secure, protected archive. We have been running around all day with Mark Remes and Steve Lyons, our friends from BES Studios. When we work with these guys, it’s more fun than work. It was a busy week at Madison+Main and I got a lot of help, from a lot of different people… #ItTakesAVillage.

Monday, March 23rd – On Monday we had a great conversation with Laurie from the Virginia Wineries Association and discussed working on a handful of new projects for her. In the afternoon I got a bunch of help from Madalyn, Lindsey and Kaity, as we compiled our entries for the 2014 Telly Awards. Apparently, we have won more Telly Awards than any other agency in RVA over the last three years… but we are not bragging. This year we have 10 more entries. To see some of our past award-winning TV spots, click here.

Tuesday, March 24th – Tuesday was a really productive day, with back-to-back-to-back creative concept sessions, but the highlight of my day was having a nice family dinner without cellphones, before we sent my daughter, Hattie, on a trip to Chicago. Hattie and her High School show choir are competing in the “Windy City” at a national show choir competition. She has been sending me pictures of famous Chicago landmarks all week. 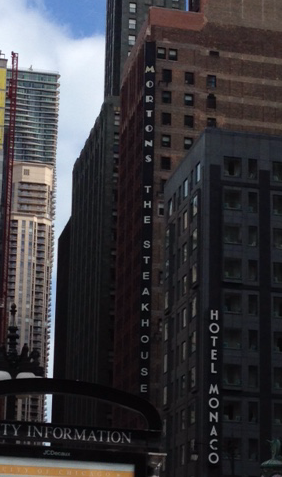 Hattie knows that I am big fan of Morton’s, so she took a picture of the original Arnie Morton’s in Chicago on Rush Street.

Madison+Main was also featured on RichmondBizSense.com on Tuesday, and they highlighted some of our recent work.

Wednesday, March 25th – On Wednesday morning after some administrative meetings, I met with the Creative Team and we breezed through our agenda in half an hour, which left us with extra time to decorate their new studio on the third floor. I took down some of the cheap Kmart prints and replaced them with weird pieces of junk. I haven’t heard them complain, so maybe they like the new look.

On Wednesday, Madalyn learned the difference between Deja Vu and Daveja Vu.

Marketing tip of the week:

Go Mobile! On April 21st Google will change its algorithm to reward websites that are mobile responsive and de-emphasize websites that aren’t. This means that if your site is optimized for mobile devices, such as cell phones and tablets, you may rank higher in search engine results. If your website can’t be seen on a mobile device, you might want to call us. We can help!

Thursday, March 26th – On Thursday we managed to get out of the office for a couple of hours and hobnobbed with fellow members of the Virginia Council of CEOs. The speaker, Adam Lee, special agent in charge of the Richmond FBI, proceeded to scare all of the business owners in the room with the recent rise in cyber crime.

On Thursday afternoon I loaded a bunch of things onto my calendar. I thought I’d share some things coming up the in the weeks ahead that you may be interested in.

I’m very excited about attending VCU’s Book and Author event on April 15th. Special thanks to Debra Marlow for inviting me. Chesterfield Chamber’s 9th Annual Celebration of the Vine is Saturday, April 11th. Unfortunately, I will miss this year’s Wine Festival because it is being held during Spring Break, but you can get tickets here.

Also on Saturday, we’ll be unveiling the new website we created for Virginia Aeronautical Historical Society at their auction party.

Last but not least, the Hospital Hospitality House is hosting their Fancy Hat Party which will be held Thursday, April 30th from 11:30 AM to 1:30 PM at the Altria Theater. If you want to meet Casey and Jessica from our office at the event, then click here for tickets.

Friday, March 27th – It’s Friday. It’s raining. But that hasn’t put a damper in our spirits. March Madness is in full swing but I’ve given up on the tournament because my bracket is busted. However, our client, Yard Works, is celebrating Mulch Madness. Go to Facebook and tell us why you deserve to earn some free Yard Works products and you may very well end up a winner. Click here to enter. 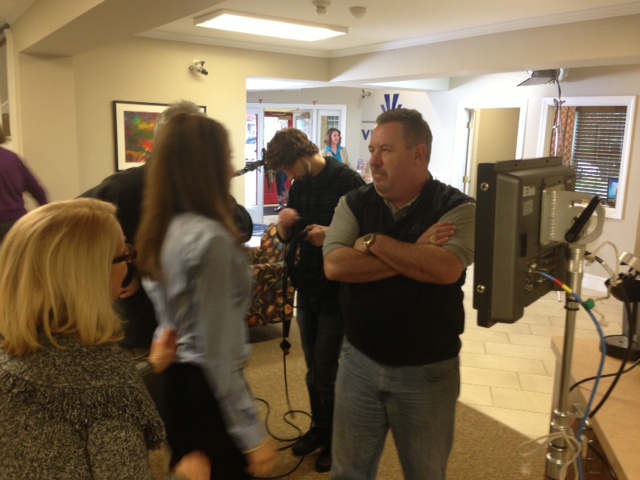 There are a whole lot of people behind the scenes at the Village Bank TV shoot.

This afternoon we ate lunch at the Kings Corner, which was conveniently located in the Chesterfield County Airport. With staff, cast, crew and a few extras, I picked up the tab for a dozen All You Can Eat buffets. When it comes to shooting a great local TV spot for Village Bank, I guess it does take a village.