Madison+Main got a lot of attention this week. I was on the local news Monday talking about the “best and worst” Super Bowl ads. Monday’s Richmond Times-Dispatch had an article in it where we announced three new clients (Madison+Main Hits a Triple) and we announced two new hires; Cassie and Madalyn. Our friends at Keith Fabry Reprographics installed a giant sign on the side of our building. 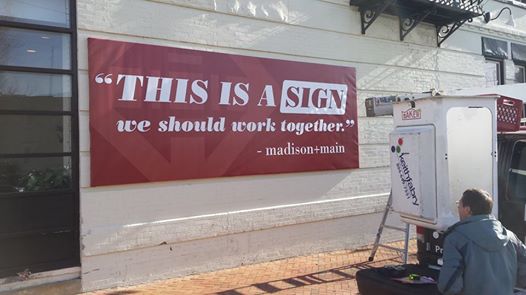 Perhaps, “This is a sign we should work together.”

Monday, February 2nd – It was good to see Rob, Reba, Carrie and Kristen on Monday morning at CBS6, even though I only had three hours of sleep after the Super Bowl and had to be in the studio at 5 AM. WRVA’s intrepid Reporter and News Anchor, Jay Hart, interviewed me before dawn for the Virginia News Network. In the afternoon I was in the studio with Sabrina and Diane at NBC12 and at 7 o’clock I joined Bill Fitzsimmons back at CBS6. I didn’t get any work done Monday, but I was still able to make it to my piano lesson (they are going well so far.. this week I learned how to play the ole Coca-Cola jingle).

Tuesday, February 3rd – At Rotary Tuesday morning I was fined $50 for having my big face on TV. Rotary is fun, but I may have to give it up soon so I can afford to send my kids to college. We had a great conference call with Yard Works and finalized plans for their latest TV spot. February is a good time to spruce up the yard and you can avoid the big rush that happens every March by calling them now at (804) 639-0311. In March, Yard Works’ phone is ringing off the hook. I call it “Mulch Madness.”

Special thanks to Russell Pander, EVP of Client Services at Life in Mobile for dropping by to present a “Lunch and Learn” to the Madison+Main-iacs. If you know of a business expert that would like to present on a topic at one of our bi monthly Lunch and Learns [open to Madison+Main employees and clients], please contact Lindsey.

Wednesday, February 4th – I took a break from writing and research Wednesday to grab a bite withVirginia Magazine Publisher, Bernie Niemeyer. It was good to catch up with Bernie and introduce him to Madalyn, our new PR apprentice. A lot of people think about Virginia Business Magazine being RVA-focused, but Bernie has done a great job reaching and covering all corners off the Commonwealth’s business news. We subscribe and I encourage you to as well.

I love my job and I love helping friends. And sometimes I get the opportunity to help my friends find new jobs. On Wednesday night I had a couple of mugs of frosty malted beverage with my neighbor and friend, Buck McElfresh, during the VCU Rams game. Buck is an experienced sales and sales management pro with extensive B2B experience, and has large account development and category management skills. He also plays lead guitar in one of my favorite bands, The Rise. Buck is looking to network with people on LinkedIn. Click here to connect with him and tell him “Dave sent ya.”

Thursday, February 5th – On Thursday we did lots of strategy work with Kara and Jessica for a number of clients. But the highlight of my day was meeting with one of my favorite people – and regular reader of the “Weekly Report” – Debbie Johnston, CEO of Care Advantage. Debbie was appointed as Virginia’s Official Adoption Champion in August by Governor Terry McAuliffe. Debbie has been spreading the story of her personal experience and reaching out to media to help the Commonwealth’s 4,500 kids now waiting for adoption find permanent homes. All of us at Madison+Main are very proud of her.

In the afternoon we had a very productive meeting with our friends at NBC12 and made it back to the office in time for a 6 o ‘clock meeting with Mark Remes, Execute Producer at BES Studios, who introduced me to Michael Sparks, the owner of the Underground Kitchen. These guys are cooking up some really cool stuff with us for Richmond 2015 and I can’t wait to tell you all about it when it’s official.

Friday, February 6th –  It’s been a busy morning as we have four or five deadlines staring us right in the face and we are working like dogs. Coincidentally the dogs in the office are not working. Derek’smutt, “Bandit,” is sniffing my feet and Jessica’s six-ounce Yorkie, “Brie,” is fast asleep on her desk. 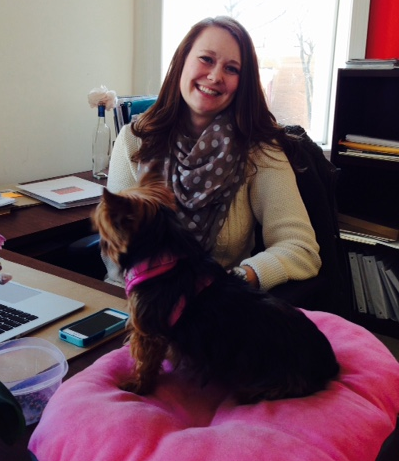 Yes, Brie is so small that she spends Fridays literally on her desk. #workisruff 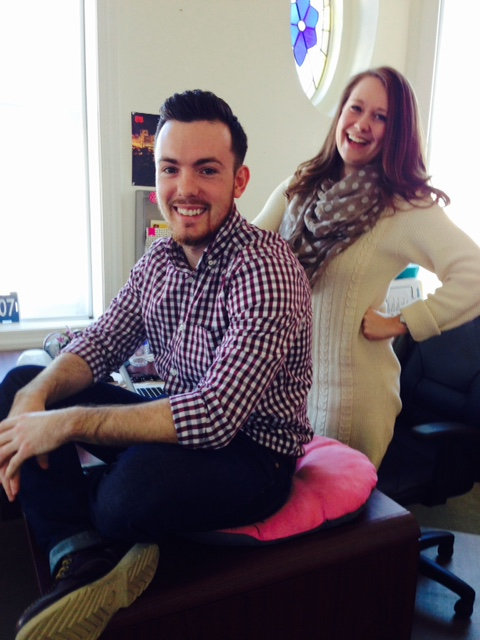 The Weekly Report is coming to you a little early this week as I have to go shoot some online videos for Village Bank. Who am I kidding? I don’t shoot them. I just come up with the ideas and stand around while other people do the work. Thanks to Village Bank Branch Manager Kelly Keene for letting me commandeer the Midlothian branch!

The mighty Sharks of Alberta Smith are 6-0, thanks to superior coaching, but they face tough challenges from Swift Creek on Saturday and Midlothian on Sunday #gosharks.

I am speaking at the Henrico Business Leaders Breakfast on Monday 2/9. #youshouldcome

The Madison+Main February Media Mixer is on the 18th at Tobacco Company. #seeyouthere

Graphic Designer, Kaity Byrum, is getting married on Saturday, September 26th and you are all invited… all 5,000 of you. #savethedate

Have a great weekend,