EXCUSE ME WHILE I SLIP INTO SOMETHING…

Today’s Weekly Report comes to you from Derek Fair, a bright, young VCU Mass Comm graduate, who is interning at Madison+Main. Derek drew the short straw and had to type the copy while I slipped behind the wheel on a three-hour drive towards Winchester. I am spending the day with the leadership and marketing teams at First Bank, as we plan a lot of exciting things for 2015. Instead of wearing a suit, I decided to take full advantage of “Casual Friday.” Today, it’s jeans, penny loafers, and my Hugh Hefner Smoking Jacket.

Last night, at the Chesterfield Chamber Annual Gala, I was in a dress and a blonde wig. Keep reading… the report gets better.

Monday, January 12th – Monday was busy. But it was quiet “busy.” No one really spoke to each other after the Monday morning meeting, instead everyone preceded to lock-in their offices and get straight to work. We have been busy and the Madison+Main-iacs have really buckled down this week; writing TV scripts for Yard Works, preparing marketing reports for two new clients, researching the demographic and psychographic profile of the residents in small towns across Virginia “Elkton, Dillwyn, etc.” and producing lots of printed collateral.

Casey was not in the office on Monday, since she was enjoying a family vacation in Jamaica. Apparently I didn’t get the memo or I suffer from short term memory loss because I dialed her extension three times before I figured it out. 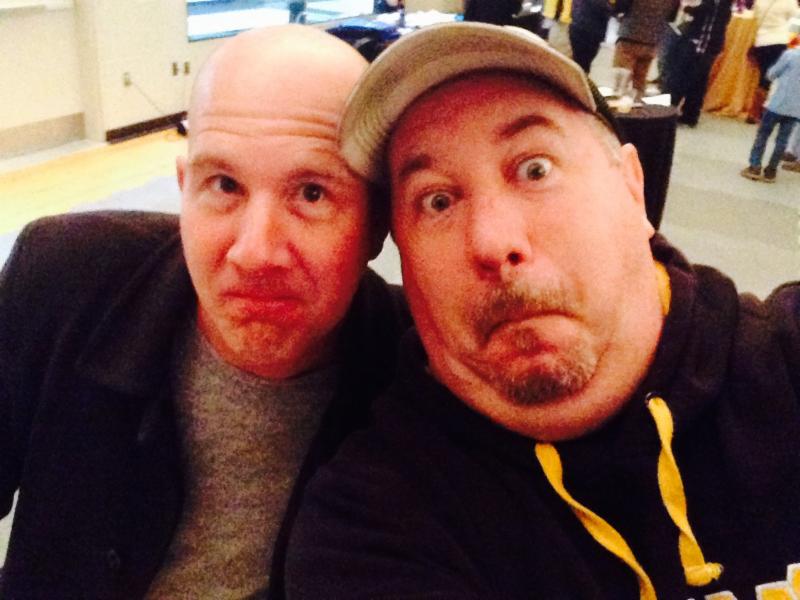 I took a selfie with my old friend Ric Withers at the VCU game. Ric is the Owner of Wythken Printing, he and his trophy wife, Christina, were at the game too.

Tuesday, January 13th – As many long-time readers of the Weekly Report know, I coach the mighty Alberta Smith Sharks basketball team. And although we lost our star player, who moved up to the “big boy league”, I had to throw down two happy dollars at my Rotary meeting Tuesday morning for two back-to-back Shark victories last weekend – one over a tall team from Chalkley, and another over a pesky team from Robious. Jack scored five points in each game and turned into a rebounding machine, pulling down 12 rebounds in the first game and 5 in the second. He goes after the ball with a vengeance. He’s like Dennis Rodman, without the weird personality, multiple body piercings and connections to North Korea.

Jessica and I had a very productive meeting with our friends from Davis & Green Electrical. Not only is D&G a client, but we also rely on them for our home and our company’s electrical needs. I am also saving up money so I can buy a standby generator from them soon. I have been reading about them forever and I really, really want one. Learn more at dgelectrical.com.

In the afternoon, our friend Cate Newbanks stopped by from FACES of Virginia. FACES is an amazing statewide organization that helps foster families and adoptive families. Really cool people with a really cool mission. And, they have a new website: facesofvirginia.org.

Tuesday night, I finally got to try out En Su Boca. You know the place… the former dirty book store at the corner of Broad and Boulevard. My friend, Charlie Diradour, turned it into an upscale taco stand. My friend and former colleague, Josh Barber, invited me out for tacos and beer. We had a lot of fun reminiscing about the good ol’ days, and the tacos were top notch.

Wednesday, January 14th – On Wednesday, RVA was brought to its knees for one-one hundredth of an inch of ice. But, I faithfully traversed the apocalyptic wasteland that was the Powhite Parkway and joined my roundtable group for a VA Council of CEOs meeting. It was a productive meeting and I was able to inspire my friend Dale Carnegie and training franchise owner, JJ White, which is quite unusual since he is typically the one who inspires me. After lunch, I slipped into the office. Literally. I forgot to throw down salt and busted my @ss on the front steps.

RVA schools were closed, which meant that all the kids were home instead of in school, and that meant the Madison+Main-iacs were also home, except for me, our fearless leader, I was at the office… because my kids were at home. 🙂

Thursday, January 15th – Thursday morning, Mark Andrews from MA Communications dropped by for coffee. I really enjoyed the meeting and am glad we were able to connect. A little while later,Todd Sears dropped by for a working lunch. Todd is the new VP of Advertising and Content Development at the Richmond Times-Dispatch. Todd is originally from Nebraska, and is new to the Richmond area, so I gave him pointers on what to do and where to eat in RVA. I’m still on a diet so I can at least talk about food, right? I also explained R.M.A. is used for both the Retail Merchants Association and the Richmond Metropolitan. I know, it’s confusing.

Thursday afternoon it was crunch time for marketing reports, but we got it done before the deadline and I left early to rehearse for my role as Master of Ceremonies for the Chesterfield Chamber’s Annual Gala. I had a great time, the audience laughed at most of my jokes and I was able to slip into something more comfortable… a dress and a blonde wig for a skit with attorney, Erica Giovanni. There are plenty of critiques of my “performance” on social media, just check out the hashtag #GetYourGalaOn.

On a more serious note, Chamber President, Danna Geisler presented me with a plaque for my 3 years of service on the Chamber Board. Too bad I was wearing a strapless moo moo when she handed it to me. Moo moo is the Hawaiian word for fat dress. 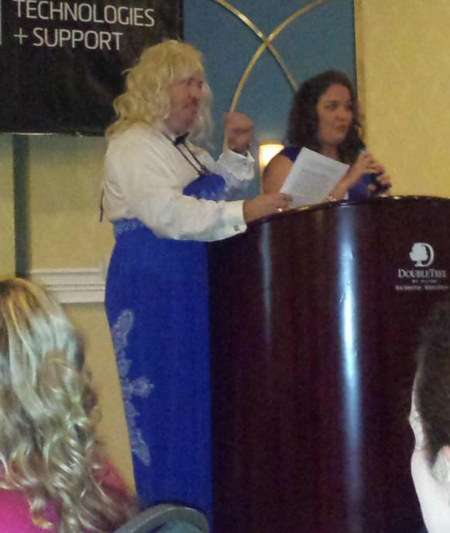 At the Chesterfield Chamber Gala “Dude Looks Like a Lady” – Aerosmith.

Friday, January 16th – This morning I loaded down the car with reports, booklets, print samples, and presentation boards and hit the road. Before our meeting, our VP Kara Forbis, Jamie Rutten (First Bank Marketing Manager), and I visited Del Sol Cafe. We had a very productive meeting and I’ve got a long drive home but I know I will make it back before basketball practice. Our kids can’t get into the gym before 8PM. I do love living in Chesterfield County, but, we have too many people and not enough facilities to adequately accommodate everyone, which results in having to spend your Friday night in a gym, because it’s the only one available in the county. Well, I heard that Art Warren is retiring last week and my friend Chris Winslow is running for his seat. I think that I am going to try to convince Chris that we need to put a few more dollars into our schools and into the parks & recreation budget.

That’s it for the Weekly Report. Wish us luck as the Sharks play Gordon on Saturday and Woodlake on Sunday. And by the way, thanks to all of those who sent me motivational quotes and encouragement last week as I began my diet. At the end of one week, I lost 2 pounds, which is frankly not very impressive. That’s like throwing a deck chair off the Titanic.

Have a great weekend, I won’t. I’ll be eating some cottage cheese.

This is what I was singing at the top of my lungs on the drive up,