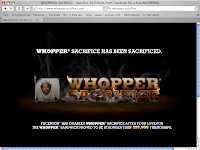 Burger King has had such a strong response to their “Whopper Sacrifice” campaign,it was discontinued after 233,906 friendships were sacrificed. Details aren’t exactly clear, but the exposure for Burger King was immense. The idea was, a Facebook user downloads an application that allows you to “de-friend” 10 users in order to receive a free Whopper.