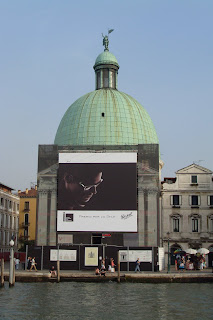 I walked out of the train station in Venice and this billboard for Persol was the first thing on the horizon. You might be surprised to see an enormous advertisement in this ancient city, but this billboard’s lifetime is based on the timeframe of work on the San Simeon Piccolo church. If you look closely, you’ll see a screenprint of the facade of this church on a mesh material to help this “temporary state” fade into its environment.
Venice is the most beautiful city that I have visited. The only other billboard like this that I saw was Dolce and Gabbana…I don’t think it’s a coincidence that they are both promoting style.
– Joshua
Branding